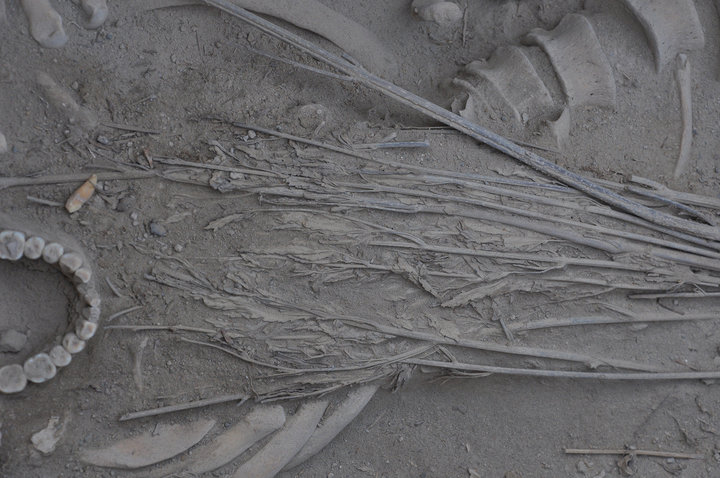 Researchers say the oldest stash of marijuana were found in the world was located in a tomb in China. According to research paper in the the journal of Experimental Botany, the cache of marijuana is around 2,700 years old and was obviously ‘cultivated for the purpose of psychoactive,’ instead of clothing fibres or as food.

The 789 grams of dried marijuana was concealed alongside a blue-eyed, light-haired Caucasian man, most likes a Gushi culture’s shaman, close to Turpan in northwestern China. The alkaline soil and the very dry conditions served as preservatives, which allowed a group of scientists to gently analyze the stash – even though it still appeared green it no longer have its distinctive odor.

Dr. Ethan B. Russo, an American neurologist says, “To our knowledge, these investigations provide the oldest documentation of cannabis as a pharmacologically active agent.”

Cannabis remnants have been discovered in old Egypt and some other sites, and it has been referred to by authors like Herodotus, the Greek historian. But China’s tomb stash is the oldest known and its properties could be well tested.

The eighteen researchers, who are mostly based in China, took the marijuana for different tests which include genetic analysis and carbon dating. The cannabis was discovered to have a relatively high THC content, the most important active ingredient in marijuana, but the 2,700 years old cannabis was too antique to determine the exact percentage.

Scientists also couldn’t say whether the marijuana was ingested or smoked, as there were no indications in the 45-year-old shaman’s tomb.

The large cache was placed in a basket and a bowl, and was assumed to be used in the shaman’s afterlife.

Dr. Ethan said in an interview that took place in Missoula, Mont, “Thus materially is unequivocally cannabis, and no material has previously had this degree of analysis possible. It was common practice in burials to provide materials needed for the afterlife. No hemp or seeds were provided for fabric or food. Rather, cannabis as medicine or for visionary purposes was supplied.”

A harp, archery equipment and bridles were also found in the tomb, confirming the shaman’s big social standing.

It took researchers ten months to remove the red tape barring the movement of the marijuana from China to England, said Dr. Ethan.

The cannabis was discovered in two of the five hundred Gushi tombs opened up so far in China’s northwestern part, showing that marijuana was either illegal to be used by some individuals or was ministered to a few others as medicine by the shamans, said Dr Ethan. “It certainly does indicate that cannabis has been used by man for a variety of purposes for thousands of years.”

Dr. Ethan B. Russo, who practiced neurology for twenty years, has once published some studies about the history of marijuana.

In reference to his last paper, Dr. Ethan said, “I hope we can avoid some of the political liabilities of the issue.”

Xinjiang, the part of China where the tomb was found, is known as the root of various marijuana strains in the whole world.